Here’s a spin on what I did during my probably all-time favorite job—a volunteer gig writing restaurant reviews for the local radical newsrag.

"Lunches to Savor and Remember"

With all the yuppies, graduate students, young families, and assorted others who've been moving into town, it's high time for the arrival of an establishment like Urban Coastal Cuisine!

Since we'd been wondering if the restaurant's name was overstated, too trendy, or aptly descriptive, last Tuesday a pair of us ventured into Urban Coastal's luncheon buffet. UCC occupies a storefront on Jefferson Street in Madison Square vacated several months ago by a retail outlet of a recently defunct small grocery chain; current tenants on the surrounding blocks include several national retail outlets. In reviving and redesigning the site, Abigail Janssen and Rich Krone, the restaurant's owners/managers, both recent graduates of Johnson & Wales, retained the original plate glass windows and one of the original entryways, blocking the 2nd door with a subtle, freeform graphic done in densely textured acrylic with metallic accents by local artist and teacher Maya Gutierrez. Banner signage announces "local seafood and ethnic cuisine"; a quartet of Seats of Consciousness, commissioned from Mariela Santos of Community Fair Food's bevy of co-workers and fans, offer inviting spots to rest, wait, converse, or meet people. Inside the windows and peering out to greet passersby and potential diners, window boxes filled with floral plantings add a spot of bright color to an otherwise subtly sophisticated presentation mostly done in natural hues.

Once inside UCC, we discovered the atmosphere attempts to mimic what I've experienced in Cambridge's Harvard and Central Squares but in a less in-your-face "this is the way to be 'in' these days" manner. Clearly there is "a way to be" if you're well-educated and you've opted for inner-city rather than suburban living, and one of the requisite lifestyle accoutrements includes at least occasional dining at places that serve other than the more classic and traditional Americana vittles.

As we perused the bill of fare, we noticed the prices were high for lunch in Madison Square. But sometimes the image is costly, right? So going for the expected splurge, one of us ordered grilled (unspecified) seafood fajitas with Caribbean chutney-style salsa and "Thai Style" fruit compote. Yes. The other decided on non-coastal, choosing slightly blackened (that's still current?) chicken breast au poivre, wild rice medley, (local!) and a garden-fresh tomato and mixed green salad with the obligatory house vinaigrette. Since the wine selection was too pricey for us, we decided to drink bottled water. Then on to dessert—this time a different ethnicity with Tiramisu and an American favorite: strawberry-rhubarb tart crowned with housemade vanilla ice cream. To accompany dessert one of us had an herbal and black tea blend created by one of our J&W graduate hosts and served with honey from New Hampshire; the other chose a double latté from a plethora of specialty coffees. On a side note, while we were lunching, folks at two nearby tables stopped in for coffee and pastry, so that less-expensive option may help restaurant revenue. 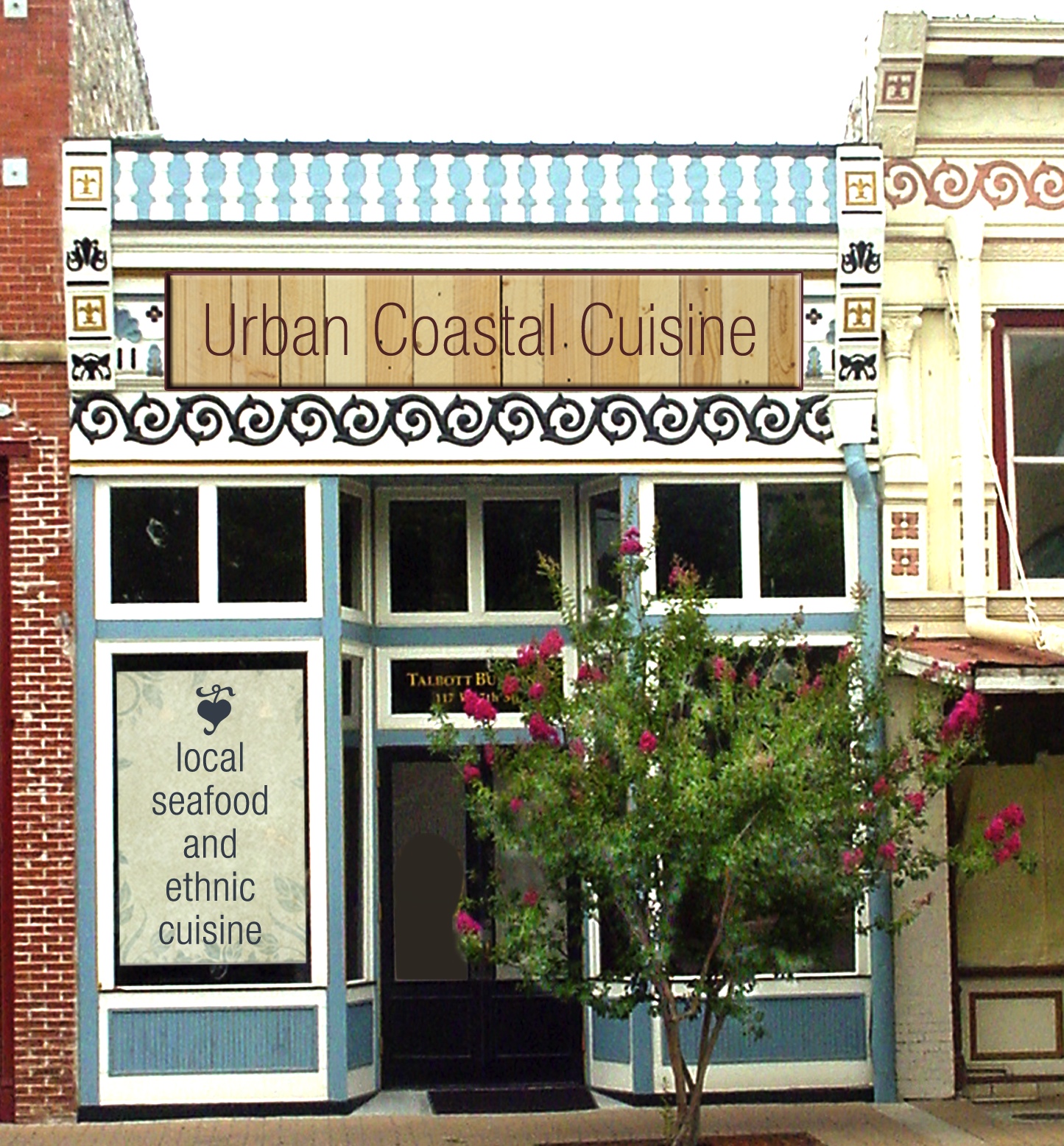 The food? Yes, the food! Presentation of all the cuisine that came to our table was clean, fresh and appealing, served on natural-colored stoneware. All the flavors of everything were nicely married, with no particular accent overwhelming another one. However, none of the food we ordered had a particularly distinct or novel taste, either: it was more in keeping with the expected standard of this kind of cuisine, but that works well!

Ambience definitely is a big part of this restaurant's draw, with interior walls painted a light sandy beige, pale wood tables and chairs, and newly-refinished wide-plank floors coupled with stoneware dishes, silk flowers on the table and a diversity of silk-screened city scene, beach scene, and city beach scene prints hanging on the walls—including Malibu, one of my local favorites. The calming effect of it all took me back to a more tranquil era and soon will draw me back to Urban Coastal Cuisine. Recorded music definitely would enhance the entire mise-en-scéne or – ideally – live music, such as guitar or mandolin. But I can dream! Rich Krone, who together with Abigail Janssen is UCC’s owner/manager, told me a live music series s part of his vision, and acquiring an arts grant to provide live music performances is another hope for the future.