…The Boundaries of Hospitality, by Caroline A. Westerhoff: this month's RevGalBookPals selection; here's the Amazon link. 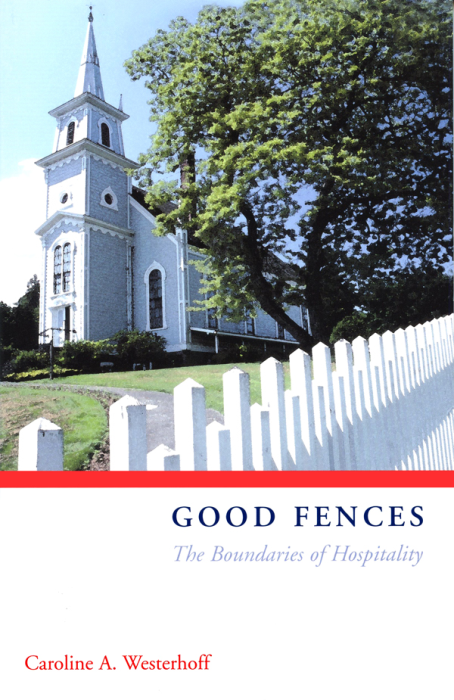 This book is a real WOW! for me—one I need to be reading right now for the insights she offers and maybe especially for the affirmations of what I'm trying hard to do in my own life right now. In early September I blogged a little about the gates and boundaries of our local international border, adding some baptismal implications. Related to fences, barriers, boundaries, exclusion and inclusion, over the 5-year life of my theology blog I've written tons of stuff about liminality and the liminal, and won't link to them now. One last thing for this paragraph: several years ago I read another WOW! book, Exclusion and Embrace: A Theological Exploration of Identity, Otherness, and Reconciliation, the first volume of Miroslav Volf's free church ecclesiology. Not a quick read, but check it out!

what on earth is it about book covers with iconic (without a doubt) white (or thereabouts) clapboard church buildings plunked down and settled in amidst verdant Midwestern or New English (doubtless) shade trees? Is there any other possibility?

To get it out of the way, this is another book cover featuring another wood frame building, this time with a white picket fence, but this one's painted gray and trimmed with white, for a look distinguishing it some from the others.

The discussion questions in the back of the book are outstanding, and I trust our discussion facilitator Songbird will offer some good ones. Like our last RevGals book, I could write so much about Good Fences, and it would help me lots to work through the questions, but due to time constraints, I'll try a free blog for today.

In mathematics (at least as far as the level I achieved) you always talk about a line segment rather than a line, because even one that seems to extend into infinity stops somewhere!

I love this hymn:

God Marked a Line and Told the Sea

God marked a line and told the sea
its surging tides and waves were free
to travel up the sloping strand
but not to overtake the land.

God set one limit in the glade
where tempting, fruited branches swayed
and that first limit stands
behind the limits that the law defined.

The line, the limit and the law
are patterns meant to help us draw
a bound between what life requires
and all the things our heart desires.

But discontent with finite powers
we reach to take what is not ours
and then defend our claim by force
and swerve from life's intended course.

We are not free when we're confined
to every wish that sweeps the mind
but free when freely we accept
the sacred bounds that must be kept.

Chapter 5, Connections, discusses defining our identity and personhood in terms of how we will and won't permit people to act toward us, regarding how we pronounce our names (and inform or not inform the speaker of the right pronunciation)...not only speaking up about the name that connects us with our own life-story and at times with a biological family of origin's history and genealogy, and a slew of related concerns about our place in the church, also speaking up when we're violated by not being heard, being disregarded, belittled or demeaned. Personal limits and communal limits. Caroline (I'll call her and hope I'm pronouncing it right) also insists we need people in our lives who know our social and cultural locations, who care enough about who we are to listen to our stories—in other words, our name, both spoken and spelled.

So many ideas...neighborhood or community? White academic-type liberals still seem fond of referring to "The Black Community," though forever I've responded there is no such thing in any kind of cohesive, definable, recognizable cultural, social or ethnic sense. Anything but! I resonated with her vignette of happening upon an Atlanta neighborhood she didn't know existed because I had a similar experience when I was going somewhere in New Africa, must have gotten lost, and found myself in a desolate-appearing space I'd never seen before, where most of the windows were broken or boarded-up, grass didn't exist, litter, trash and glass was strewn all over, sidewalks and streets were even worse-off than elsewhere in the city, but it seemed totally residential, with scattered random people sitting out on the stoops of the ancient rowhouses and tenement housing.

Living and acting in the Gray Zone, not in the sense of persistent indecision and inaction, but within the frequent ambiguity and usual unfinishedness (here and now—not quite yet) of earthly manifestations of Heaven's Reign. Stories of death, dying and funerals...she's right about their importance, but why do I keep needing to be assured of things almost anyone has learned from experience?? After my mother's passing I drove around for several weeks with her cremains in the car trunk—she'd requested to have them sent out to sea. In fact, she'd also specified no funeral or memorial service, but I trumped that and planned one for Residential Road Beach. Heather drew some flowers for a bulletin cover, Betsy Whatever Her Lastname typed the inside contents I provided, including a pair of scriptures (I have a copy somewhere, but couldn't find it in time to post this) I hastily chose and after the handful of relatives arrived from Hio, they and some neighbors and a few acquaintances gathered on the beach where I greeted them, offered an opening prayer and then each person "shared" (wonderful church, 12-step and group therapy word) a memory of Pat. But later, despite phoning three people I knew would be there with me and for me, I could recruit no one to go to the beach with me and send her cremains out with the tide. This is not something done with a solitary prayer! It needs to be done with prayers, hugs, maybe tears, followed by good food, conversation, and assurances "we're here for you," but no one was there for me or has been there for me since that summer.

Thinking about my experiences of exclusion, those from the church have been most painful, but maybe because they haven't surprised me too much in some sense I've come close to saying it's been okay, which it hasn't been at all. I won't re-count the countless examples here. But inclusion? One of the most stellar but maybe not surprising in the least was the Tongan UMC congregation I was pianist for. Although they were continuing their practice of unaccompanied choral music, they wanted to venture into the American-style of accompanied choral music, and also sing some standard anthems (though translated into Tongan by the choir director...) Almost every week I accompanied their rehearsal, but played for worship only about once a month. After worship we'd have dinner in the fellowship hall or whatever they called it, and then it was back into the sanctuary for testimonies. Why am I writing this? Because they always included me in many of their non-Sunday social events and parties, so different from those people who hadn't experienced living as strangers in a foreign land and different culture. One of the choir members said to me, "We have the gift of music and the gift of food." They also totally possessed the "gift of hospitality," very fully in the Image of the Divinely welcoming and embracing One.

Again for me at this time, Caroline's advice on what voices to hear and heed aligns with what I'd decided to do. Dennis, the spouse of someone I sort of know from one of my churches is a wise and retired house painter. I have the impression he's officially Roman Catholic, but also involved in some alternative Catholic communities. He attends a weekly bible study I've facilitated on both a regular and sporadic basis in the past at Old Condo Shadows. I am so afraid to say anything remotely negative about anyone, but my opinion of that group's usual attendees was anything but high. Dennis expressed some choice, not complimentary opinions of them too, especially their requesting prayers for things like MRIs, safe trips to the grocery store (though with all the folks driving into buildings around here, that seems realistic), etc. After all, the whole world is in pain and they can't see! Dennis and his spouse (a way cool painter who still talks a lot about her Dad the Dead Pastor) and another Dear Woman were in my group of four at the Dead Sea Scrolls exhibit. He and I got to talking again, and he informed me what I've told myself 234092830948 times—most of the people in the churches I've tried getting involved with and have done some teaching, preaching and playing at simply do not know where I live, who I am and where I've been and definitely do not care.

To read in a bound book that expecting and needing to find connections when I go to a new situation is not unreal! Truly it's not!

Thanks, Caroline, and thanks, whichever RevGals chose this book.

my Amazon review: edges and inclusions: ours and others
blogged on 11:00:00 AM