Sunday afternoon, Advent 4 (yep, I'd intended to blog this about 12 hours ago) 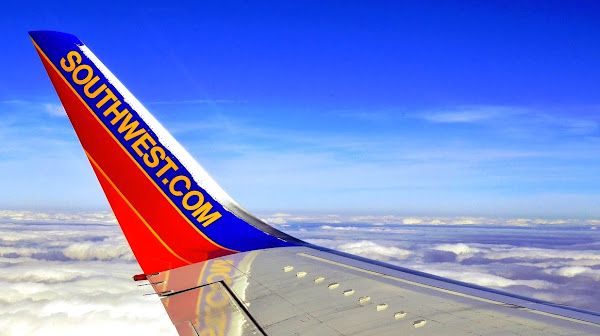 Big 737 was not set to go by the 3:05 scheduled flight time, and while I waited along with a holiday-sized throng in a new to me location, Gate 1 downstairs at Lindbergh Field, in quick succession they announced boarding would start, had stopped, an engine needed inspecting and we could get on board, after all, but to do so we needed to match up the number and letter on our boarding pass and queue up numerically under the new, clearly-numbered overhead signs. Doubtless most of my blog readers know about Southwest, the Socialist Airline, and today was my first encounter with "You Are Still Free to Choose Your Seat: Southwest's new boarding enhances the preflight experience," (I spent too much time last week preflighting InDesign stuff…) as the December inflight magazine, Spirit expresses it.

Invariably and inevitably, socialism's way of the people, by the people, for the people generates rules, restrictions and unyielding structures that eventually inhibit slow down and stop the people's freedom. But oh, by the way, SW still has unassigned seating—at least for now. At Christmas Jesus came to us born for the people as one of the people, lived for us the people, died for the people – us! – and rose from the dead for the people—for all creation, actually. An original basic intent of carrying the Good News to more and more people and organizing churches properly and in decent order, has resulted in local congregations, denominated church bodies and judicatories overburdened (hmmm…in mining the overburden gets removed and hauled away, far away) with rules, restrictions, infrastructures and superstructures that inhibit the freedom of the people Jesus lived and died for and that in the end sometimes contradict The Way of The Crucified and Risen One.

In my typical way I've made excuses for the development of institutional structures, but too often they develop because people seeking Their Own Place and a Sense of Importance will declare and decree in order(!) to get themselves more clout and greater visibility. Last week more than once IRL again I mentioned I have no regret (none whatsoever—really!) that I didn't finish seminary, adding (again) I didn't want to be a senior pastor or head of staff…friend and colleague pastor I was talking with again observed most of the people who get to be senior pastors in a multiple-staff church are impossible to work with and no one wants to stay on staff with them anyway. Refer to what I wrote above.