As we anticipate the season of Advent with its call to repentance and promise of hope along with the start of a new liturgical year, a couple of blogs inspired me. First, RevGalBookPals' selection for October was Jesus for President: Politics for Ordinary Radicals by Shane Claiborne and Chris Haw. Jan Edmiston wrote an outstanding intro to the book and the comments added a lot, plus because I haven't read the book yet I can't say anything remotely authoritative, so to learn more you need to go to the RevGals' website. In referring to Jesus as our President I'm making a habit of the more corporate and covenantal "we, us, our, ours" and moving far away from a proprietary "I, me, my, mine." 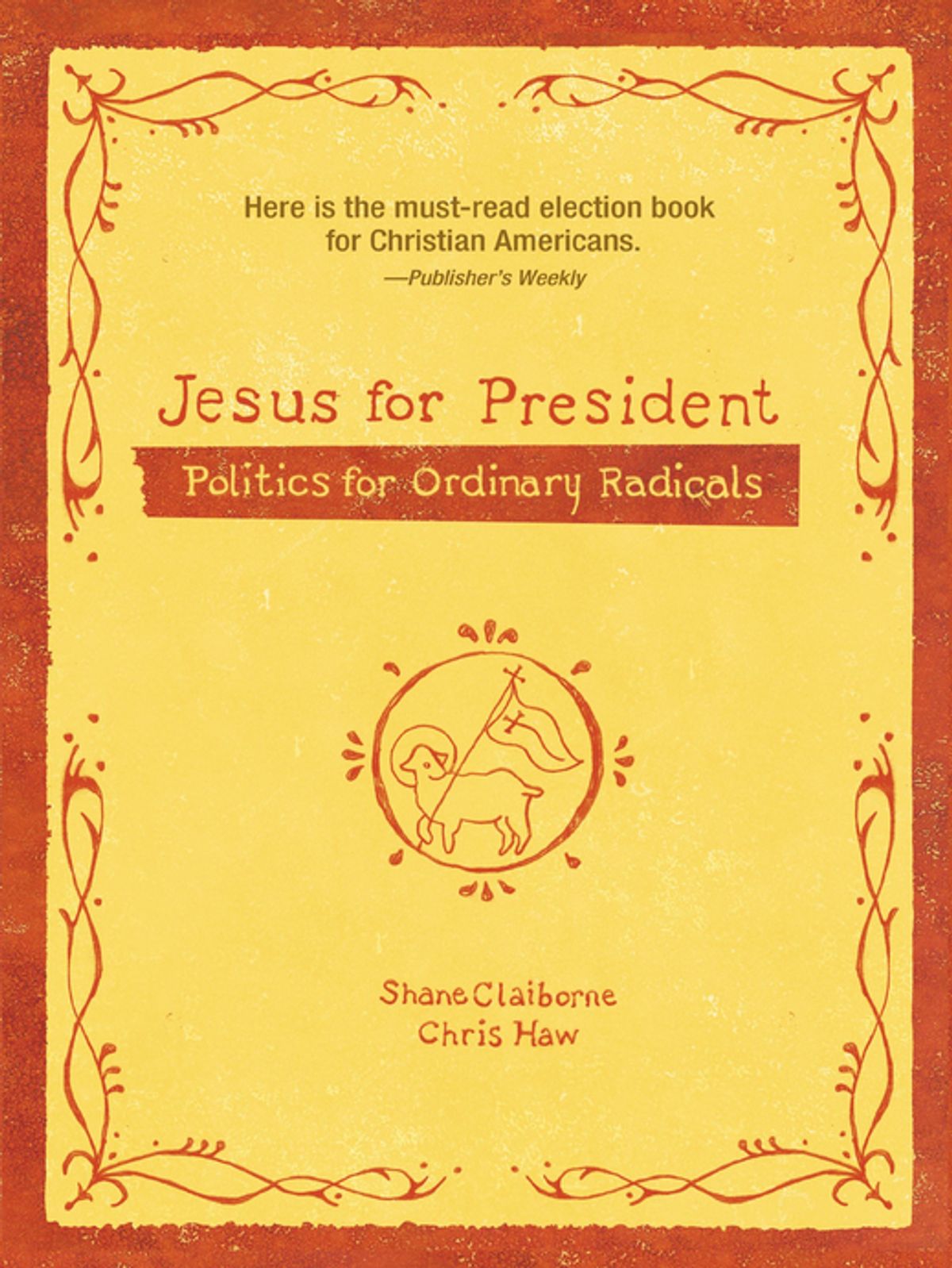 This topic hardly could be more timely since slightly over a month ago I finished for now a 10-session Monday evening series, "Reading The Bible Economically," developed and hosted by Lee Van Ham. I attended 7 of the 10, did the reading for all of them and the journaling homework for all but two; our wrap-up for the course particularly reminded me 1) the way I initially learned to interpret scripture was highly countercultural, very economic and extremely political, as it constantly considered each person's embeddedness in and responsibility to the vitality of our church community's worship, witness and service, our relatedness to every aspect of the neighborhood surrounding us as well as our lives as political people at every level; 2) I do not regret in the least not continuing professional service in the church; 3) my current level of agitation and discontent regarding lack of opportunities to contribute to a degree consonant with my background, experience, and ongoing sense of call indicates something in my life needs to change.

A quote from Jesus for President:

"The construction of the set-apart people into a living temple of blessing is going so-so. The solution: God puts skin on to show the world what love looks like. But here is the catch: The Prince of Peace is born as a refugee in the middle of genocide and is rescued from the trash bin of imperial executions to stand at the pinnacle of this peculiar people. A strange way to start a revolution…"


In the book thread comments I wrote:

• Although I don't have the book, I wanted to make a couple of flag comments. From whence I came, neither national flag nor Christian flag ever had been an option in the sanctuary, but intense political activism was. I've heard that immigrant German Lutherans during WW I were the first to place a US flag in their sanctuaries because they wanted themselves and everyone else to be clear they were Americans now.

• Quite a few years ago during a conversation about worship someone pointed out that with adequate scriptural and historical citations it likely would be very possible to prevent a flag being installed in the sanctuary, but removing the flag forever probably would not and could not happen.

• Four or five years back on the old (2nd iteration, maybe?) online UCC forums someone started a thread about flags in sanctuaries. My immediate gut reaction was "what kind of theological idiot would even think to ask that?" but one of the replies opened my mind very wide. It essentially said, "Yes, we have an American flag in our church sanctuary. In our chancel the means of grace - font, table, ambo and cross - are on a raised platform; the flag is on the same level as the gathered assembly so the flag symbolically listens to and hears the prophetic word along with everyone else."

"Divided allegiances" segues into a closely related blog post for World Communion Sunday from my Facebook friend Presbyterian Hunger in Fasting, malls and the eucharist.

PH starts out by explaining, "I started out walking…in search of a church where I could break my fast with communion." His narrative then recounts how in turn he viewed a steeple (church, maybe?), a roof that hopefully signaled a Greek Orthodox church, a strangely shaped cross that proved to be a supermarket, then an Asian restaurant, and finally a car dealership. Finally, PH spotted a white steeple that actually was a church structure full of church people, so he entered the building and found a eucharistic liturgy well in progress in a packed, clearly multi-cultural congregation.

Post-worship and liturgy, PH feasted at a richly and abundantly stocked Panera and then attended another innings of the event he'd journeyed to that city for—a conference on community food security. He concluded his blog post with, "As I passed the cathedrals of capitalism, as whizzing cars passed me, I wondered how long this lifestyle could possibly last…"

Among the plethora of domesticated gods that include Egyptian imperial religion, Roman imperial religion, the Jerusalem Temple and contemporary urban consumerism, each of them and all of them subtly and not-subtly bring to their adherents a reign of death, not as gracious gift but at huge cost to the individual and to society. But the God of the Bible, God of the prophets, the God of Jesus Christ cannot be contained or domesticated in any way and by grace and without cost to us, this God raises the dead.

In "our" culture of consumerism we're close to being governed and owned by our desires for excessive consumption, so does the culture rule our wants or do our wants rule our lives? The biblical ideal demonstrated YHWH as sovereign, but we know the people longed for a king like those other nations had. As the authors of Jesus for President, Shane Claiborne and Chris Haw observe, "The Prince of Peace is born as a refugee in the middle of genocide and is rescued from the trash bin of imperial executions to stand at the pinnacle of this peculiar people" Yes, and during his earth-life Bethlehem-born and Nazareth-bred Jesus socializes and celebrates with outcasts and marginalized, rejects conventional ecclesiastical and political authority, gets himself convicted and killed on charges of sedition and blasphemy and dies outside the city, far from the arena of civilization, from the crossroads of commercial and consumerist activity, from The Place where religion and spirituality usually (invariably, inevitably) become static, codified, rationalized and institutionalized, losing all power to save and transform. What a friend we have in Jesus? Jesus calls us friends, as possibly the ultimate accolade, yet his Lordship is one of servanthood, as is our presence in the world.

As the people of God we have been formed in the sparse economy(!) of many deserts where obvious signs of life are ultra-meager yet where life teams hidden beneath the surface. We have been uniquely re-birthed by Jesus' death and resurrection. We know the heart of a stranger, because we have been strangers to the dominant cultures and popular mores in all of our Egypts. Do we currently experience the heart and the lifestyle of strangers here in this 21st century consumerist culture? A Fourth World people is a nation without a state. How about us, wherever we pitch our tents? Are we a nation, a distinctly constituted people? Is Jesus our President? Are we stateless or citizens?
blogged on 10:10:00 PM