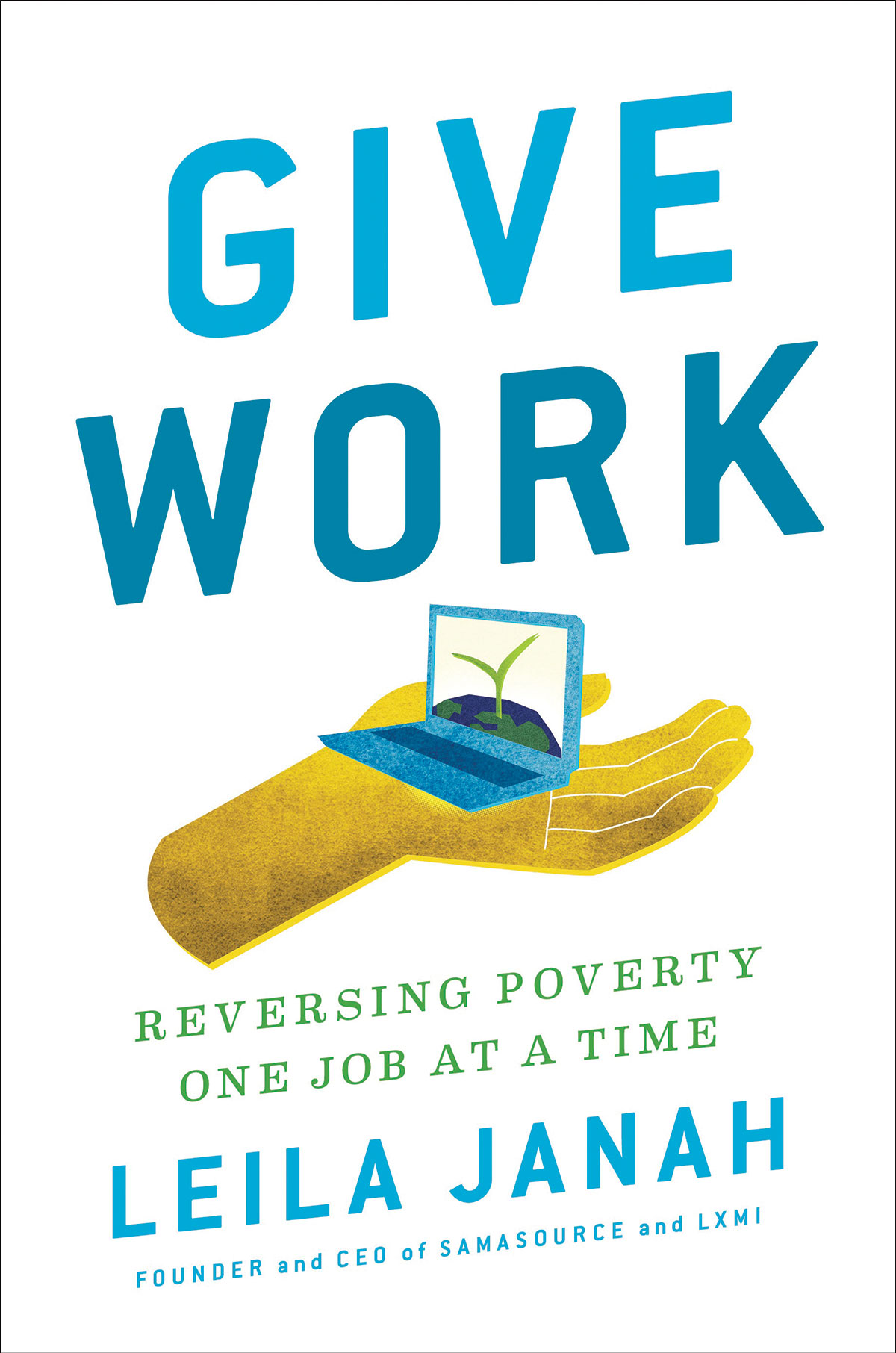 • Give Work: Reversing Poverty One Job at a Time by Leila Janah on Powell's

• Intro: We all realize at least for the human years between 20 and 90 "age is only a number," yet I'll mention entrepreneur and paradigm-changer Leila Janah died of epithelioid sarcoma at the much too young age of 37 in January 2020. RIP and thanks for writing about the inspirational possibilities of a digitally and humanly connected world.

We can give work…

• Because life first must be gift before it becomes task.

• Because the world is even flatter than Thomas Friedman told us.

For close to a millennium, goods, materials, and money have moved with little regard for national borders, but historically, humans have not been able to go very far. The fall of the Berlin Wall in 1989 broke enough boundaries to create a single global market; six years later, netscape went public and brought internet access to regular people, eventually leading to individuals being able to virtually be and virtually work in places other than their actual physical locations.

Leila Janah's autobiographical account of her lifelong adventures in Give Work is copyright 2017, meaning it was written, edited, and ready for press some time before that year, and almost four years later, interconnections have expanded even more than when the author finished the book. 2021 is about a week away, and we're almost ready for a sequel!

Janah cites topographical barriers of forests and deserts that prevented earlier, pre-internet era connectivity between many African countries, as well as death-dealing mostly European colonialism that extracted natural resources, used them elsewhere, and left the population bereft. Maybe paradoxically, countries with land not so richly endowed sometimes were able to develop human potential much more readily. In terms of reversing poverty, although at times limited direct infusions of cash, services, or supplies from government or non-profits can be helpful and sometimes will be necessary, the giving work concept means people do easy to learn computerized work that companies worldwide need, and it happens in a fair and verifiable work-for-pay exchange. Those wages then stay in the community and lead to more income for others as the money circulates.

It's never easy to find an appropriate name for a product or entity that will span cultures and geographies. In Sanskrit sama is equal or fair. In Arabic sama means sky; it's the root of the Hindi word for same. Leila Janah hoped her company would give everyone an equal opportunity by sourcing in ways that enhanced the value of "sama," thus becoming Samasource. Janah imagined, developed, and planted Samasource on an astonishingly tiny budget—even for a startup. Samasource has grown into an excellent option for companies of any size anywhere to access digital workers who produce quality and get paid fairly.

Although Samasource first sought to employ persons stuck in poverty because of almost zero work options in countries like India and Kenya, Leila chronicles later experiences and challenges she had training people in rural California and rural Arkansas. Maybe surprisingly, big cities in developing countries had literally countless, increasingly affordable internet cafés; underpopulated, depressed American towns lacked all kinds of viable infrastructure. (A few years later, I need to research if or how that has changed by now.)

What was Give Work's best counsel? Keep following your dreams and if your initial product rollout doesn't have glitches and inconsistencies, you have waited too long to launch!

An interconnected world is a flat earth, a planet that keeps shrinking, finally down to the size and weight of a smart phone. Leila was able to develop and leave legacies of companies Samasource and LXMI* because of the imagination, energy, and resilience she'd been born with, because of the education she was able to get as a result of where she'd been born, and equally as much, because of her connections with other people. It's not what you know, it's not who you know: it's all about who knows you.

Needless to say, despite beginning the Samasource enterprise somewhat on her own with her own pocket change, all along the way Leila Janah found emotional and intellectual support in friends, acquaintances, classmates, and coworkers. They got who she was, trusted what she felt called to do. Oprah reminded the teenager, "You know you can't do life on your own." I've spent too long developing more skills and further expertise—even including more academic credentials. Objectively, it doesn't matter how splendidly someone does something if there's no place to do it.

It can sound vulgar, but "human capital" is essential for success. Success? Contributing in a manner and to a degree related to the person's gifts and preparation and sense of call. And though virtually no creative anywhere ever imagined they'd get an immense financially windfall, one truly expects working hard and spending time eventually will result in a livable income.

Reminding myself: amidst the overall isolation and urgent "what's next" of the current global pandemic, what was Give Work's best counsel for everyone? Keep following your dreams and if your initial product rollout doesn't have glitches and inconsistencies, you have waited too long to launch! I am so reaching out a few more times and expecting opportunities good to go as soon as the surrounding world starts to open up again… really!


Notice of material connection: I received a copy of this book from publicist, author, publisher, or distributor, with no requirement or expectation I'd write a positive review. As always, opinions are my own.

my goodreads review: Life as a Gift in a Flat World


*Though it's not the main topic, Give Work interestingly details development and marketing the ethically sourced for-profit complexion care line LXMI.