Sit a while and we'll while away some time. I'm not sure of the formal, technical meaning of while, but for me the noun "while" connotes an unspecified length of time that might or might not depend on circumstances; whereas "while" the verb is casual, unstructured, without stated purpose. Both noun and verb feel fuzzy around the edges.

They came to the edge of the village where they were headed. The stranger acted as if he were going on but they pressed him: "Stay a while and have supper with us. It's nearly evening; the day is done." So he went in with them.

And he sat down at the table with them. Taking the bread, he blessed and broke and gave it to them. At that moment, open-eyed, wide-eyed, they recognized him. And then he disappeared.

Then the two went over everything that happened on the road and how they recognized him when he broke the bread. Luke 24:28-31, 35


For the most part I consider whiling away time an unplanned, almost random activity with no real expectations. But we know God never wastes any experiences; God makes best use of every time, all the time. One of the best examples is Holy Saturday, the day after Jesus' crucifixion when from outward appearances nothing happens, yet from God's reality, everything does and leads into the fullness of redemption on the day of resurrection.

Here in Luke's gospel we have an example of close to unintentional staying a while to while away some hours—probably until dawn, since nights could get scary and dangerous in that time and place. Yet that while turned into the intimacy and nurture of a shared meal. The encounter became a reminder that Jesus, born in Little Town of House of Bread, is Lord who provides the loaf, the sustenance. This Jesus, who often comes to us as a stranger, after a while often becomes someone in whom we recognize God's presence before they leave.

Fuzzy around the edges with room for God to make a way? Yes! Purposeless whiling for a while?! I'd say not! Amen? Amen! 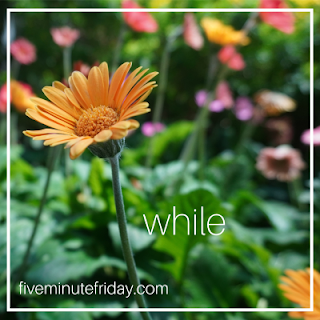